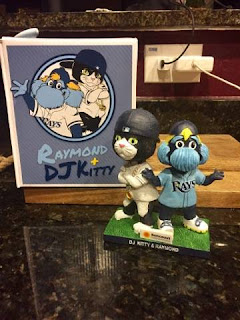 My wife and I are expecting our first child, so I thought this was a cool buy for me, but also would double as the first bobblehead I give my son/daughter. I moved from Florida in 2006, so I left before the DJ Kitty thing. While I do not really get it, I love cats so it works. Raymond is the team's first mascot, and was introduced June 21, 1998. I remember the big unveil, no one knew what the heck he was. People were pretty angry, but I think I liked him because he looked like a Muppet.
Posted by joe at 10:12 PM 39 comments: