Since my birthday (Aug 22), most everyone has had some sort of poor luck. The details are not important, but it really seems that being 27 has started in a way that I hope is not a sign of things to come. Anyways, today picked me up quite a bit. It was crazy, but follow along...


After work, I had to run to get a dress shirt for a funeral tomorrow. It turns out that the only color shirt that I do not have is white, so I figured I would just run into the mall. So JCPenny is my go-to place when it comes to work clothes because they usually have good sales on clothes that can hold up in both washer care, and dry cleaning. Anyways, I find the shirt that I wanted, and I began to leave the store. The price tag was $35 dollars, but for some reason, it would ring up as $1.94. I made sure that it was the correct price, purchased it (just incase), and then decided that maybe I would stock up. I ended up buying about 8 different shirts, and spent only a total of $18. Right place, right time. 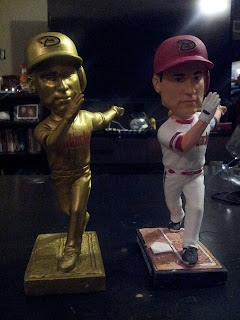 This past Saturday was the Paul Goldschmidt bobblehead SGA, and the crowd came out in a big way. This is the only giveaway during the 2013 season that had 25,000 units, and also a large number of ticket/giveaway guarantees. I really enjoyed how the promotion went, but apparently there were people sitting around at 10:00 AM (5:10 PM Game).

Anyways, I scored the gold one on Wednesday when they held a contest in the 7th inning. That was the inning that the Rays made a comeback, so that stretch of 30 minutes was great for me. I was just in the right place at the right time. This is my first "Limited" bobblehead, as these were only made up to 1000. They are not numbered, and there is not a marking that labels it as a limited exclusive or anything.

I was able to get two home jersey bobbles on Saturday. My girlfriend told me that we could not go super early because 1. She did not want to wait, and 2. I already had the gold one. I still talked her in to going a half hour before gates, but our plans would end up a little shifted. Once we got there, the line from the main rotunda was all the way down a street, and almost directly across from the basketball arena. We ended up walking back to our car, and we just listened to the Rays game on the radio. We ended up going to the game at 3:30, and sure enough they still had plenty of bobbleheads left!

Solid addition to my bobblehead collection, but I am looking for a Longoria retro bobblehead. If anyone knows of someone who has an extra, I'd be happy to swap one of my extra regular Goldschmidts.

The D-Backs and Rays started a 2 game series today, and I have waited what seems like a year for it to come. Over the past few weeks I have wondered where the Rays would be standings wise, and same goes for the D-Backs. Both teams need wins, so I am ok with the teams splitting the season (If the Rays win tomorrow).

So tonight, my girlfriend and I got to the ballpark as soon as the gates opened, in hopes of getting a few of my favorite Rays players to auto some of my photos and baseballs. The people that I was hoping to get were Longoria, Price, Rodney, Myers, Archer or Maddon. Realistically, I brought multiple cards to every player on the roster just incase, but I knew that I would have to pick my battles. Longo was standing directly next to the home plate fence, but he was talking to a few of his friends (I assume), and did not want to be bothered. He did sign, but only a couple of autographs. Although he mentioned he would sign again, there were people on the field who kept following him, so I think he just wanted to get away. While I was waiting for Longo, I saw Archer and Molina signing. I had to let those guys go just because the opportunity to get Longo was much more important (to me at least).

I went back to the Rays dugout bummed out, but then I saw a few players coming over. One of the players that walked to the dugout was Wil Myers, and he stopped to sign two autographs. I had two items for him, and I am happy to say that he signed one of them! 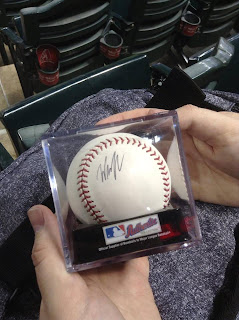 I have heard quite a few people complain about his signature, and I was not very impressed either. At the same time... It is Wil Myers! So excited about this, wish I could of gotten him my 8x10, but this is awesome. He did not sign on the sweet spot, but it is what it is. Someone said that he only does that for paid signings, but a lot of my friends back in Florida have said that he has not had any paid signings, and rarely signs for anyone.

Sean Rodriguez gave me two baseballs during the game. This was the first baseball that was given to me just before the first pitch. 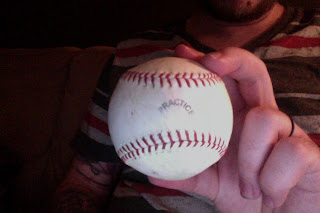 I have never had a ball from batting practice or anything labeled as "practice" before. It was pretty neat because I was just sitting there, and he pointed at me and tossed it. I guess it was because I had my raise gear on. In the 6th inning, Sean tossed me another one! I made sure it was supposed to be for me, and he gave me a thumbs up. In the later innings, Myers tossed a ball to this young boy, but this big girl pushed him out of the way and grabbed the ball. They boy was very upset, and started crying. Since we ended up with two baseballs, we gave the boy one of them. He was still a bit unhappy because getting a ball from some guy with terrible facial hair is not nearly as good as a ROY candidate, but I am sure he will appreciate it some day.

Anyway, I will be back at it for game 2 tomorrow! Hopefully they will split this series.