Not sports related, but I am just looking out for everyone. Unless it's Texas Roadhouse, In-n-Out (Steak n Shake will do too) or some good BBQ, I will almost always pick a good bowl of cereal when I am hungry. The commercial for this cereal roped me in, and it was terrible. Dont buy Krave. EVER! 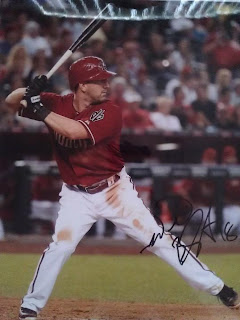 The Diamondbacks have been great about holding a few signings at local AT&T stores these past few months. This month there were 2 opportunities with the 1st being JJ Putz ( I am going to post what Dan from "It's like having my own Card Shop" gave me later). This store is just across the street from my house so it was great not have to go stand in line super early. The line was surprisingly long, actually it was longer than the Upton one in May! When ever I get to talk to an athlete I always ask if they like doing signings and meeting fans and they always have the same answer. Willie was a straight shooter with a "I like meeting the fans, but I don't really like to do signings." answer. Thanks for your auto, and your honesty Willie! Dan, I am going to bring yours to the game tonight just in case I see you! My seats are right next to the Cubs bullpen.
Posted by joe at 12:41 PM 3 comments: 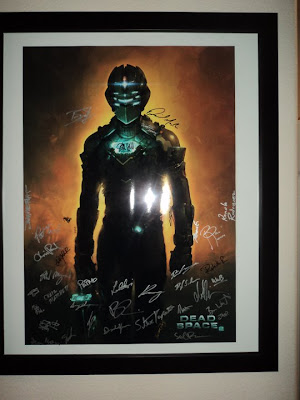 Since the Electronic Entertainment Expo (E3) started today, and my favorite game has announced a 3rd installment, I thought I would share a true 1/1 item from the developer. When the second installment was released, the art director held a contest to celebrate the game getting a solid rating from the public/critics. They actually referred it to when Babe Ruth called his own shot. They had hidden a reference to the game getting a positive score of 90 or above in the game somewhere. The director asked that participants try and find the hidden marking, and email a picture of it. I ended up finding it, and sending within minutes. A few days later he sent me this original artwork that has been used for prints, and it was signed by every person who designed the game. I still keep in contact with the art director, and am looking forward to see the vision of the 3rd game.
Posted by joe at 4:48 PM 1 comment:

First off thanks to my friend Dan from It's like having my own Card Shop for putting on a contest to get me some followers. If it were not for him, I would not have gotten back in this hobby. Thanks again, Dan!

Tonight I was re-arranging some pictures on my wall, and decided since I don't have any new cards, I would go ahead and post a few of my favorites. So here you go! 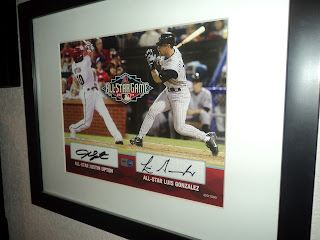 I picked this up at the MLB All-Star Fanfest last year. It is signed and authenticated through MLB by Justin Upton and Luis Gonzalez. I think it was $50 framed and everything. It all went to charity that was a plus too. 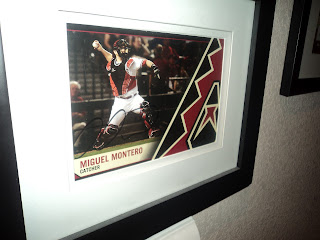 I actually won this Miguel Montero auto this past year at DBacks Fanfest. His signature is nothing special, but he is one of my favorite players. I was very pleased when they locked him up for 5 years. 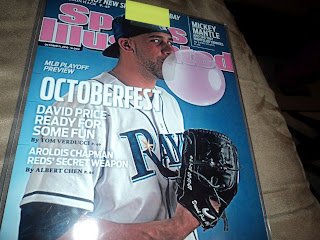 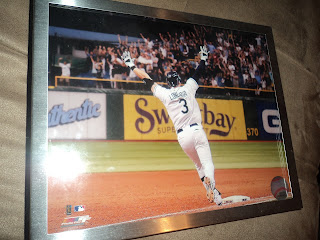 While both of these are not signed yet, I am hoping to get them signed when I go watch the Rays play the Angels. David Price seems like such a cool guy, and Evan Longoria is the first real superstar position player he Rays have had (Not counting Hamilton). One day he will hold out for more money, and I hope the Rays are saving for that day.

I'll post a few other signed 8x10's later, my brother just told me that we are going to see the Avengers tonight.... again.