It's been a while since my last post because I have banned myself from baseball card altogether, but its time again! First off I will share my two Ebay frustrations....

Today I thought I had placed a bid for a lot of 2 autos. Both cards were "Ticket to Stardom" autos with one being Conor Jackson of Dbacks fame, and the other was Scott Kazmir of the Rays. I thought I placed a bid but for some reason it never posted, and I never thought to check again. It went for a total of 5 bucks shipped.

I also was submitting an offer for a 2012 Topps Triple Threads Longoria auto, but the sellers counter offer was only .50 less.... However, I did see a Longo Triple Threads auto of a lower number at a very low price. I clicked it with only 20 seconds remaining, tried placing a $20 dollar bid, but was beat by the buzzer. Who knows if someone had an auto bid, but it was heart breaking.

So now I would like to post my 3 favorite Longoria cards in celebration of obtaining my 50th different Longo card. It's crazy to think that just back in April I had zero cards period! Thanks again Dan! 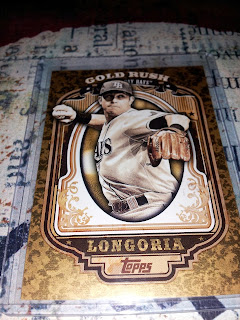 Longo card #50 for me! Courtesy of Dan @ It's like having my own card shop 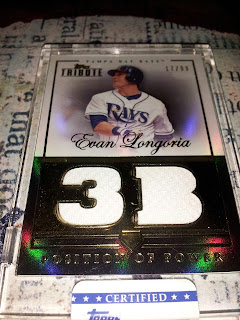 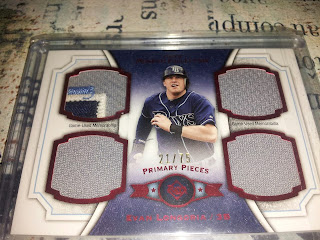