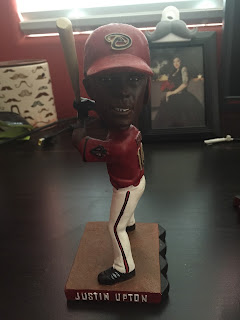 This was the second bobblehead that I had picked up from a sale on Sunday. The seller was adamant on selling this for $10, but I got it for $3.50 along with 5 other players. Justin Upton was a fun player to watch, but also very frustrating. He was a part of one of the most fun teams I have ever got to watch play, the 2011 D-Backs. Apparently the base connects with a number of other 2009 bobbles, and the only one I did not get from the sale was Augie Ojeda.