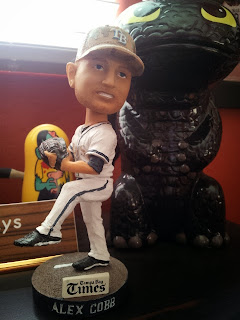 Alex Cobb has been one of my favorite Rays players since he came up from the minors in 2011. Since his call-up, he has consistently gotten better, and really has done a great job filling the void that both Price and Shields left. He did not pitch a game this season, as he was recovering from a "minor" strained forearm, which has since left to him scheduling Tommy John surgery. So he will likely be gone until the trade deadline next year, and have one more season under Rays control.

This bobblehead commemorates his dedication to military members in the Tampa Bay area, and it is one of the better crafted Rays SGAs. Cobber is joined by my Toothless piggy bank... Yes, I am a 28 year old man with no kids that has a piggy bank.
Posted by joe at 7:00 AM